During the Christmas and Easter season each year, the Wisconsin State Capitol rotunda becomes dominated with many religious displays. To counteract these displays, Atheists, Humanists, and Agnostics at the University of Wisconsin-Madison (AHA) have added our own display to the mix.

The display that we have chosen for this year was thought out and created by AHA officers. It is a brightly colored poster which reads, “Only go to church on Christmas? Forgot about lent? Forget your guilt and like any other day, have a happy April 16th!” It also adds at the end that, “This message is brought to you by Atheists, Humanists and Agnostics and UW-Madison”. We chose for this display to be bright and cheery to draw viewers in, and then to have them comprehend what it is saying and to give somewhat of a shock factor. 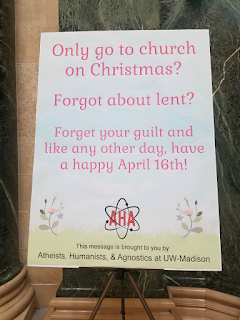 The AHA outreach officer, Emily Pyszora, lead in the creation of this display and also set it up in the rotunda. She has some thoughts on why it is so important for this display to be put up as she stated that, “It is vital for the secular community to have a voice, especially in our government if the church is going to continue to be ingrained within it.” She also hopes that these signs continue to show that Wisconsin residents are not just of the religious variety. She believes that by having this sign up, and by having our name on a sign in the capitol, this sends a strong message to those who see it. Emily states that, “the more that the secular community puts themselves out there to be seen, the better. People who only see the world through their religious viewpoint need to be comfortable and understanding of secularism, because secular people have to live their daily lives in a religious world and are tolerant to religion. If only religious displays are shown in our highest state government building, one who is an agnostic humanist, like myself, will not feel represented.”

Emily goes on to describe the display in detail. She wanted to note that AHA is not putting this sign up to “de-convert” anyone, but is putting it up to say, “hey, we exist too! And if your religious ideals are going to be allowed here, our secular ideals can be too”. This sign was designed with the mindset to get people thinking. The title AHA officers were using to describe this sign was “nonchalant atheists”. This is reflective of the sign saying “April 16th” instead of “Easter”. This was done so that possible religious people would stop to think about how just because Easter is a sacred day to them, it is not for everyone. 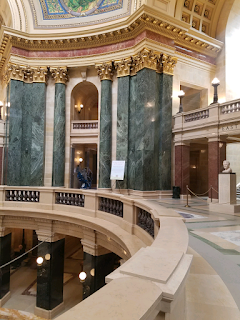 The Atheists, Humanists, & Agnostics at UW-Madison have proudly created many other capitol displays in the past; you can check out last year’s Easter display here! The display from last year made was a satire as it was based on a modern, newer religion called “Jedism”. It referred mainly to the Jedi, Obi-Wan Kenobi as a savior. Overall, AHA is glad that we are able to make our voices heard and are able to represent the secular community.