Around Easter every year, the Capitol rotunda becomes cluttered with numerous religious displays, mostly of a Christian nature. This year’s the rotunda features a large wooden cross, several Christian posters promoting Jesus’ death, and pro-life displays, among many others. This time, the Atheists, Humanists, and Agnostics at the University of Wisconsin-Madison (AHA) have added a Jedism poster to the mix. 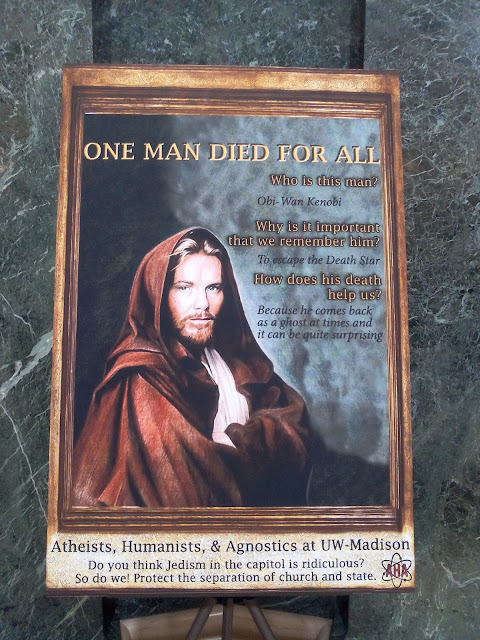 The poster, designed by AHA, is based on a modern, newer religion called Jedism. Its followers worship Jedis such as Obi-Wan Kenobi, from the Star Wars movies. Their poster reads “One Man Died for All”, referring to the Jedi, Obi-Wan Kenobi. The poster displays a portrait of Obi-Wan Kenobi as a Jedi, but is oftentimes confused as a portrait of Jesus. Their poster asks the following questions with respective answers: “Who is this man?” “Obi-Wan Kenobi”, “Why is it important that we remember him?” “To escape the death star”, and “How does his death help us?” “Because he comes back as a ghost at times and it can be quite surprising”.

According to AHA President Nicole Niebler, the intention of this display is to advocate for the separation of Church and State, and to draw attention to the public forum system in the Wisconsin State Capitol, which allows large wooden crosses and other religious displays to enter the halls of government. “It would be ideal to uphold the separation of church and state by keeping our government Capitol building free of religious representations,” Niebler explained, “but because the Capitol is deemed an open forum, all religions and views are acceptable to be represented. Our hope is that this satirical display of Jedism will encourage free thinking, and promote the conversation of what religious displays should be acceptably promoted in our foremost government building”. 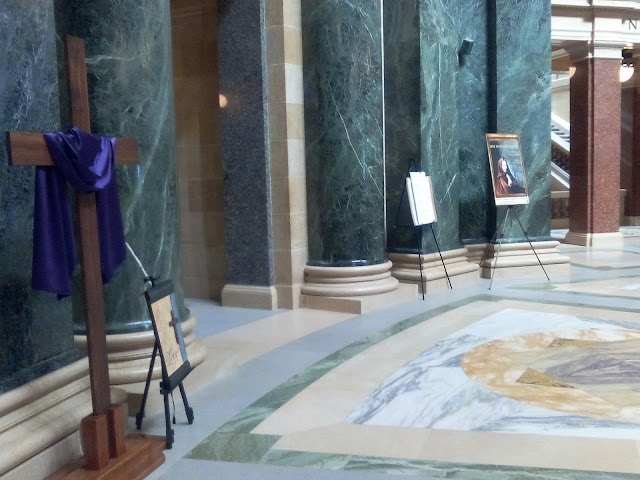 “Our display highlights the loopholes religious organizations can fit through to promote their own agendas,” Niebler continued. “The Wisconsin state government should not have the authority to decide what displays of opinion should be presented in a rotunda with a limited amount of space. How will the Capitol decide which permits to approve? What’s to stop one religious organization from flooding the forum with their own views, while others don’t get representation? It’s no secret that the Capitol is flooded with Easter displays around this time of year, and that gives the impression that the because so many displays from one religion are displayed, the government promotes Christianity. That’s why we know it’s important to highlight how the Wisconsin government building dances around the separation of church and state line”.

The Atheists, Humanists, & Agnostics at UW-Madison are no strangers to controversy. Last year, AHA put up three displays in the Capitol representing the fabricated “Madison Sun Worshippers” and two fictitious religions from the book series and show, Game of Thrones: “Old gods” and “New gods”. AHA is also the recipient of a $65,000 grant from the University for the 2015-2016 year, the largest budget ever received by a student atheist organization.