Skip to main content
University of Wisconsin–Madison
Dealing With Doubt? Conflicts with Religious Family? Questioning Your Faith? You are not alone.

This is the message that will reach thousands of students and community members in Madison-area buses over the next four weeks. The message is part of a new ad campaign organized by AHA, featuring fifty 11″x28″ advertisements running from February 21st until March 19th. 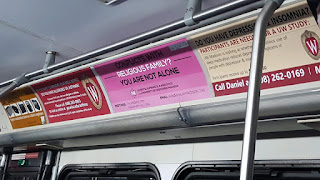 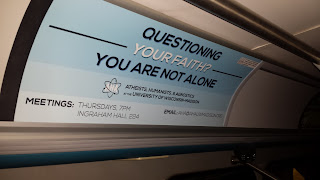 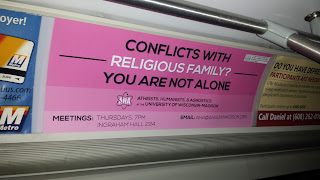 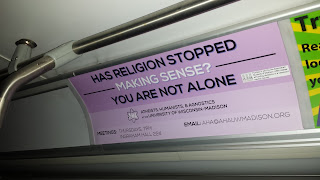 The campaign is designed to draw attention to help anyone who might be struggling with issues regarding their faith in Madison, with a special focus on students. College is a time when many young people reevaluate what they believe in. Challenging deeply-held religious ideas can be especially daunting, and AHA is here to help any students who may be struggling with this process. Many students face hardship from their family and friends once they “come-out” as nonreligious, and we want to let them know that there is a community of like-minded individuals waiting for them.

In our mission statement, AHA notes that we seek to “provide a support group for those who may be struggling with issues regarding their faith or lack thereof.” Through this bus campaign, AHA will reach students who may not otherwise be reached in our advertising and flyering efforts. The Madison Metro Transit bus system has installed most of the advertisements on buses that tend to run on campus, which maximizes our exposure to students. This means that we will reach many of the thousands of students who utilize the Madison Metro Transit bus system every day.
We are also planning to run an additional four-week campaign to advertise our upcoming fifth annual Freethought Festival, one of the largest free, student-run freethinking conventions in the country. These advertisements will feature FTF5’s three headlining acts: James Randi, Eugenie Scott, and a panel about religion’s role in government. They will be in Madison-area buses from March 13th to April 9th.

For information about the campaign, please contact: Nicole Niebler, nniebler@wisc.edu

These bus advertisements are funded by AHA’s 2015-2016 General Student Services Fund (GSSF) grant. AHA’s $64,000 budget, the largest ever received by an atheist student organization, is paid for by student segregated fees. For more information about AHA’s budget, please visit: http://www.ahauwmadison.org/2014/12/Another-monumental-day-for-aha.html