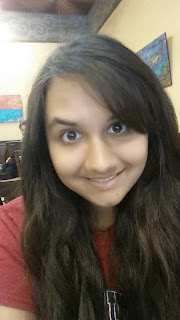 Meghana Brandl is one of AHA’s Co-Secretaries. She is a sophomore majoring in History. Although Meghana knew about AHA because she was on the mailing list, she was hesitant to go to meetings at first because she didn’t want to be among a group of angry atheists talking about how much they hated god. Upon going to her first meeting, she was delighted to find out that AHA meetings consist more of discussions about philosophy and current events than they do god-hating. After that, Meghana became much more involved in AHA and applied to be an officer by the end of her Freshman year.

In her spare time, Meghana practices Tai Kwon Do. She was able to hone her skills throughout high school, but has since fallen out of practice along with the absence of a good Tai Kwon Do group in Madison.

I was raised Catholic. My dad’s family is Catholic/Evangelical and while my mom’s not terribly religious, most of my extended family on her side is Hindu. I went to Catholic church most of my life and mostly believed it and all that good stuff. However, when I was in the 5th grade, a close friend of mine died and I had a giant existential crisis. After a couple of months, I eventually came to many conclusions, the gist of which is that I didn’t believe in god. I’d never met an atheist before and actually thought that I was the first person in all of human history to not believe in god. I was rather upset when I found out that I did not, in fact, invent atheism.