This post is also featured on the Center for Inquiry On Campus blog, the Course of Reason. 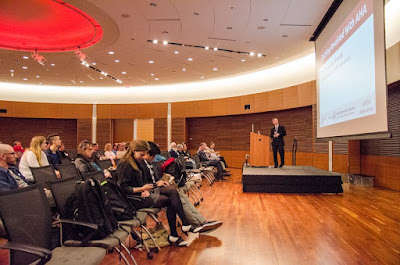 Like all other freethought conferences, at Freethought Fest we advocate for secular values, such as freethought, science, and skepticism.

What’s the best part of Freethought Fest? It’s completely free, and anyone can attend.

Our keynote speaker this year was Susan Jacoby. Susan is the author of the 2008 New York Times best-selling book The Age of American Unreason, which tackled the issues associated with American anti-intellectualism. She began her career as a reporter for The Washington Post, and has since been a contributor to a variety of national publications, including The New York Times, the Los Angeles Times, The American Prospect, Mother Jones, and The Nation. She has written ten books in total including The Age of American Unreason, Freethinkers: A History of American Secularism, and The Great Agnostic: Robert Ingersoll and American Freethought. At Freethought Festival 4, Susan gave a dialogue titled “The Conscience of a Freethinker,” which touched on issues like consequentialism and free will.

In addition to Mrs. Jacoby, AHA welcomed roughly a dozen other speakers from throughout the secular community.

Among those speakers was sex educator Lindsey Doe, who hosts the well-known YouTube channel Sexplanations. Other speakers included bloggers Ed Brayton and Heina Dadabhoy, Freedom From Religion Foundation attorneys Andrew Seidel and Patrick Elliott, author Candace Gorham, activists Debbie Goddard and James Croft, and comedians Jamie Kilstein and Tommy Nugent. We also hosted two panel discussions, one featuring speakers on the topic of Issues Facing Women in Secularism, and the other featuring students on the topic of Religion and Morality.

All of our FTF4 videos are now on YouTube, which you can go view now:

Throughout FTF4, we attempted to tackle important issues within the secular community, but also important issues outside of our movement. At this years conference, we wanted to host conversations focused on real-world issues. A few examples include James Croft, who spoke about racial tensions in Ferguson, Debbie Goddard, who spoke about student activism, and Candace Gorham, who spoke about why so many Black women are leaving the church. Our diverse lineup of speakers brought many different perspectives into these conversations, which added value in many ways.

I hope, at least in some small way, that our conference made a positive impact on the lives of our attendees, on the community in Madison, and on the freethought community in general, while reminding people that they can have a tangible impact on social change within their lifetimes.

Lastly, we are currently in the planning stages for FTF5, and we’d like to hear from you. If you’d like to give suggestions about how we can improve the conference or who you’d like to see speak, please fill out this brief survey.

Freethought Festival is funded by student segregated fees through an annual operations budget received by AHA from the University of Wisconsin-Madison.