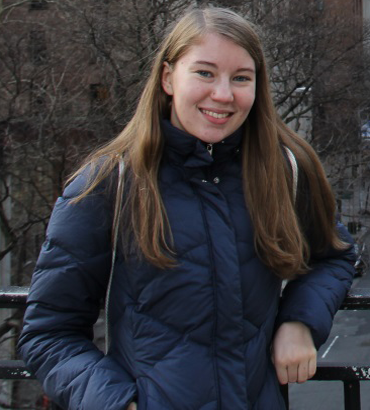 Melissa Lyman is one of the Co-Treasurers of AHA. She is a freshman majoring in Biology. When Melissa came to UW Madison, one of her goals was to find a more diverse group of people with beliefs that differed from the conservative, republican beliefs she had grown up with. AHA proved to fit her goal nicely,and she has been coming to meetings ever since. In her spare time, Melissa likes to watch the daily show, bake, cook, run, and weight train.

Melissa’s Secular Story
As a kid, neither God nor religion in general played a pivotal part in my life. Since joining AHA, I’ve realized that this is relatively uncommon. I had religious friends, but I never questioned them about it. My parents stopped taking me to church when I was about 4 years old. I remember asking my mother, “Why?” and she just replied that we didn’t have time to go every Sunday. It made sense to me at the time but when I was older I discovered that my mom had simply wanted my brother and me to learn about Christianity due to its prevalence in our culture. However, she disliked the forceful rigidity of the teachings and the lack of encouragement to keep an open mind. She didn’t want to indoctrinate my brother and I with these teachings—she just wanted us to learn about it to enable us to make our own decisions later in life. I appreciate now how my mom had never given me a straight answer regarding her views about politics and religion; she simply gave me the facts and tools for figuring it out myself.
Throughout my life I never thought too much about how I didn’t believe in God. In high school, my parents would turn on The Daily Show and The Colbert Report and I was surprisingly interested. I enjoyed the shows and it made me want to explore more political news reports on my own to ensure I was informed. I grew to realize that my views were definitely skewed left. One of the main differences I had with most Republicans was the lack of separation of the church and state. It seemed as though they continually supported their views by referencing the church, which bothered me. To support political decisions based on an outdated ideology didn’t make sense to me. I began to have long discussions with my mother about the government and each parties’ views and enjoyed debating with her about many current event topics. I realized then that I was nonreligious but I never associated myself with the label Atheist until I was looking for student organizations on campus to get involved with.