Skip to main content
University of Wisconsin–Madison
The Wisconsin State Capitol rotunda became more crowded than ever today.
Every December, the Capitol rotunda becomes cluttered with numerous religious displays, mostly of a Christian nature. This year’s entrants include two large nativity scenes, multiple signs praising Jesus, a Seinfeld-inspired “Festivus” pole, tables advocating pro-life and creationist views, and a large menorah, amongst many others.
Once again, AHA has added our own displays to the fold. 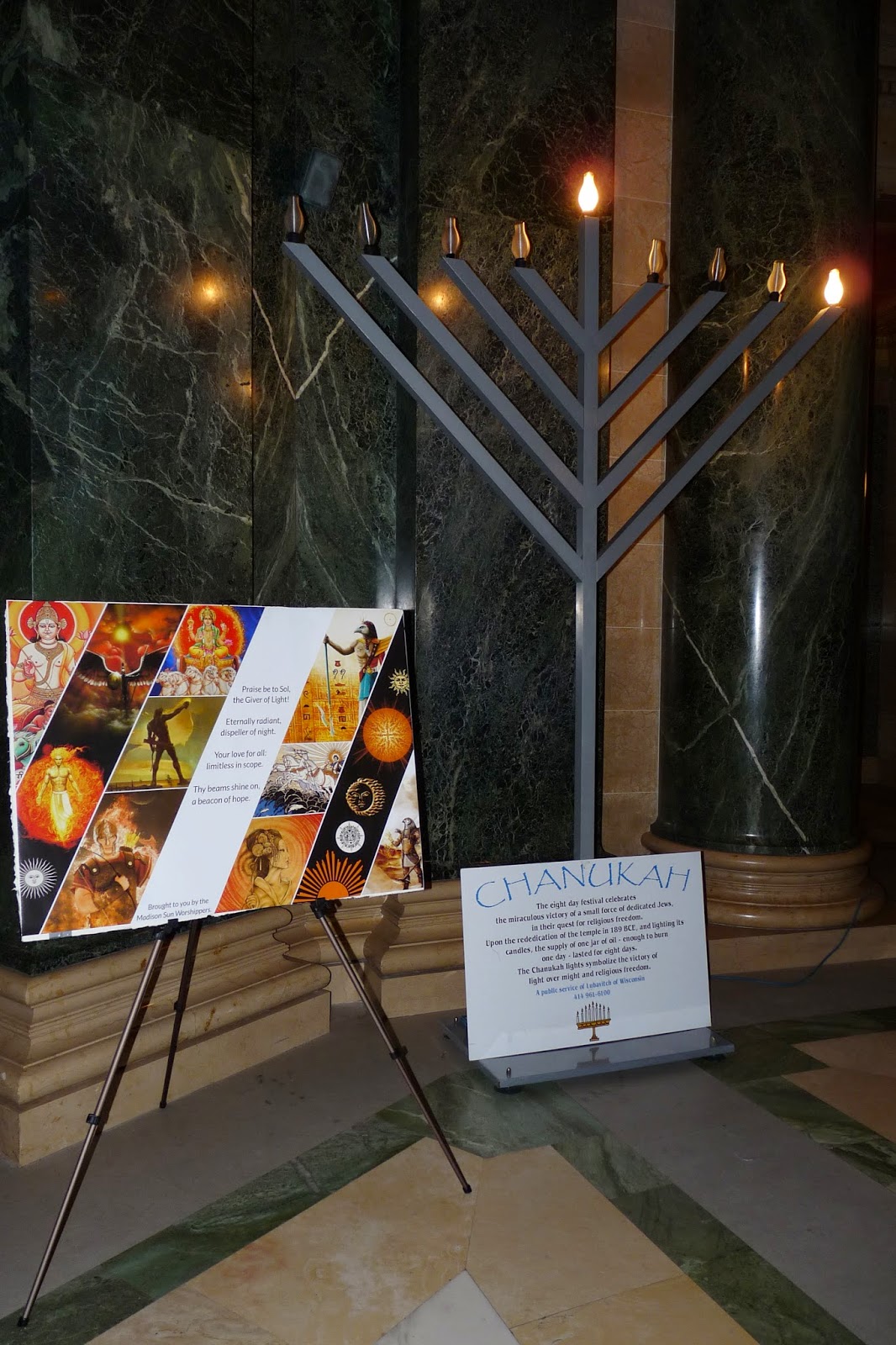 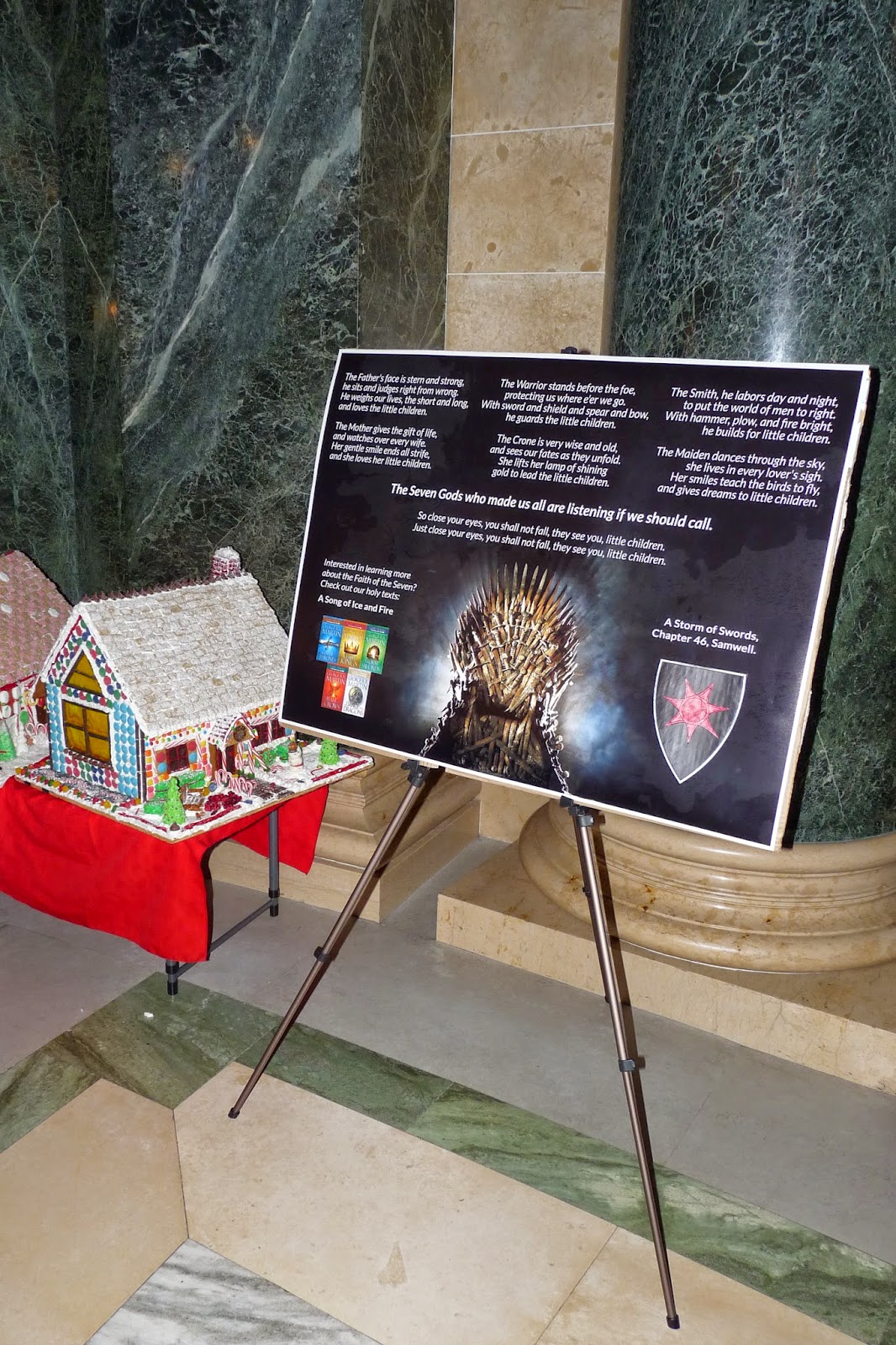 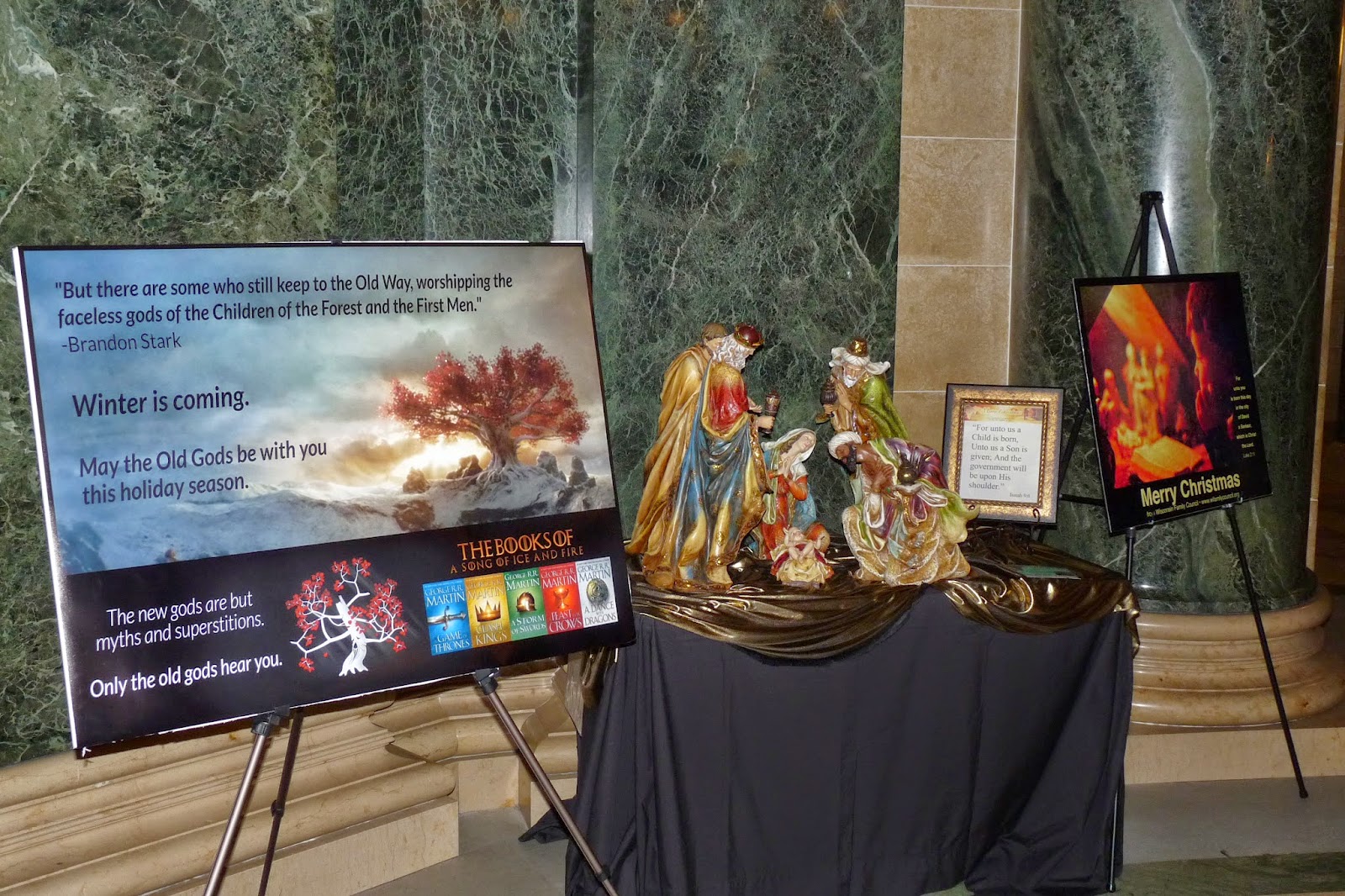 Last year, we discovered that it was incredibly easy for AHA to secure a permit for our own installation. In fact, practically anyone can put anything they want in the Capitol. All you have to do is fill out this simple one-page application (PDF). This year, we decided to push the boundaries by making our displays as blasphemous as ever. We applied for several different permits, and got approved for three displays on behalf of completely made-up organizations.

The first sign erected by AHA is on behalf of a fabricated organization of “Madison Sun Worshippers.” 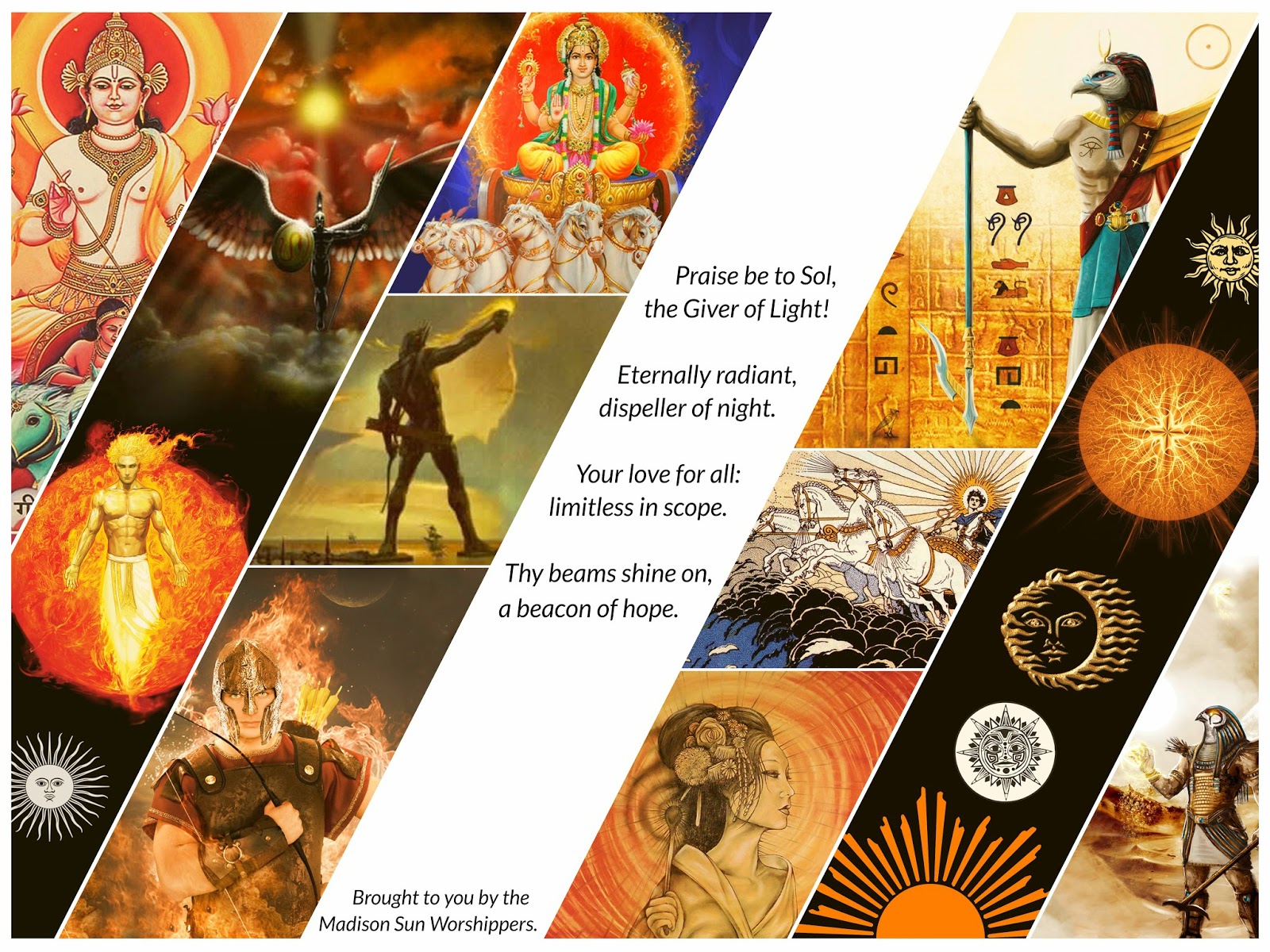 The second and third signs, submitted by additional fictitious groups, were dedicated to the gods from the popular television show Game of Thrones. One is dedicated to the so-called “Old Gods,” featuring a sacred Weirwood tree and the slogan “Winter Is Coming.” 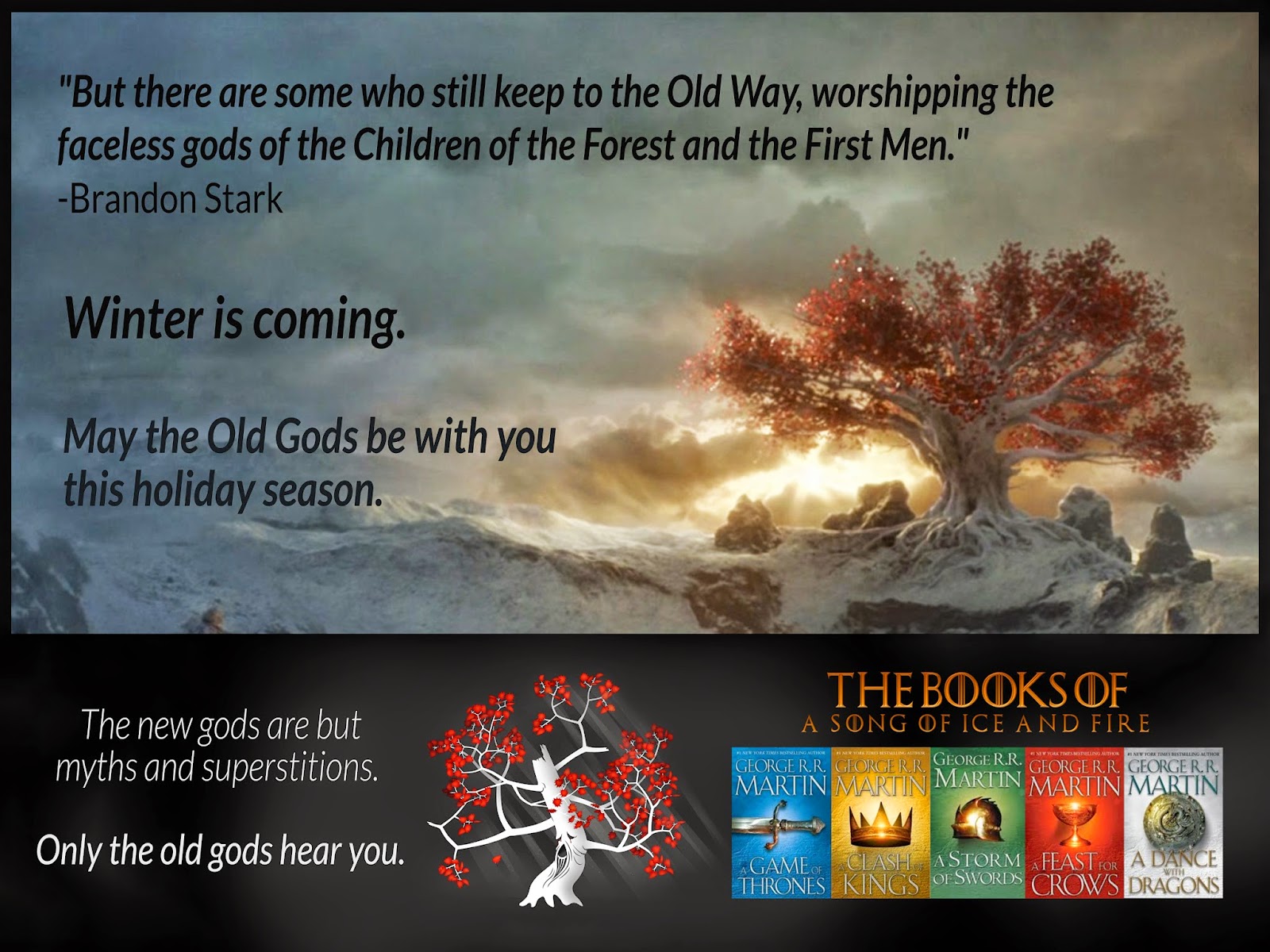 The other is dedicated to the Faith of the Seven, detailing the attributes of the seven “New Gods” in the form of a hymn from the fictional series, while referring to the fictional book series A Song of Ice and Fire as our “holy texts”. 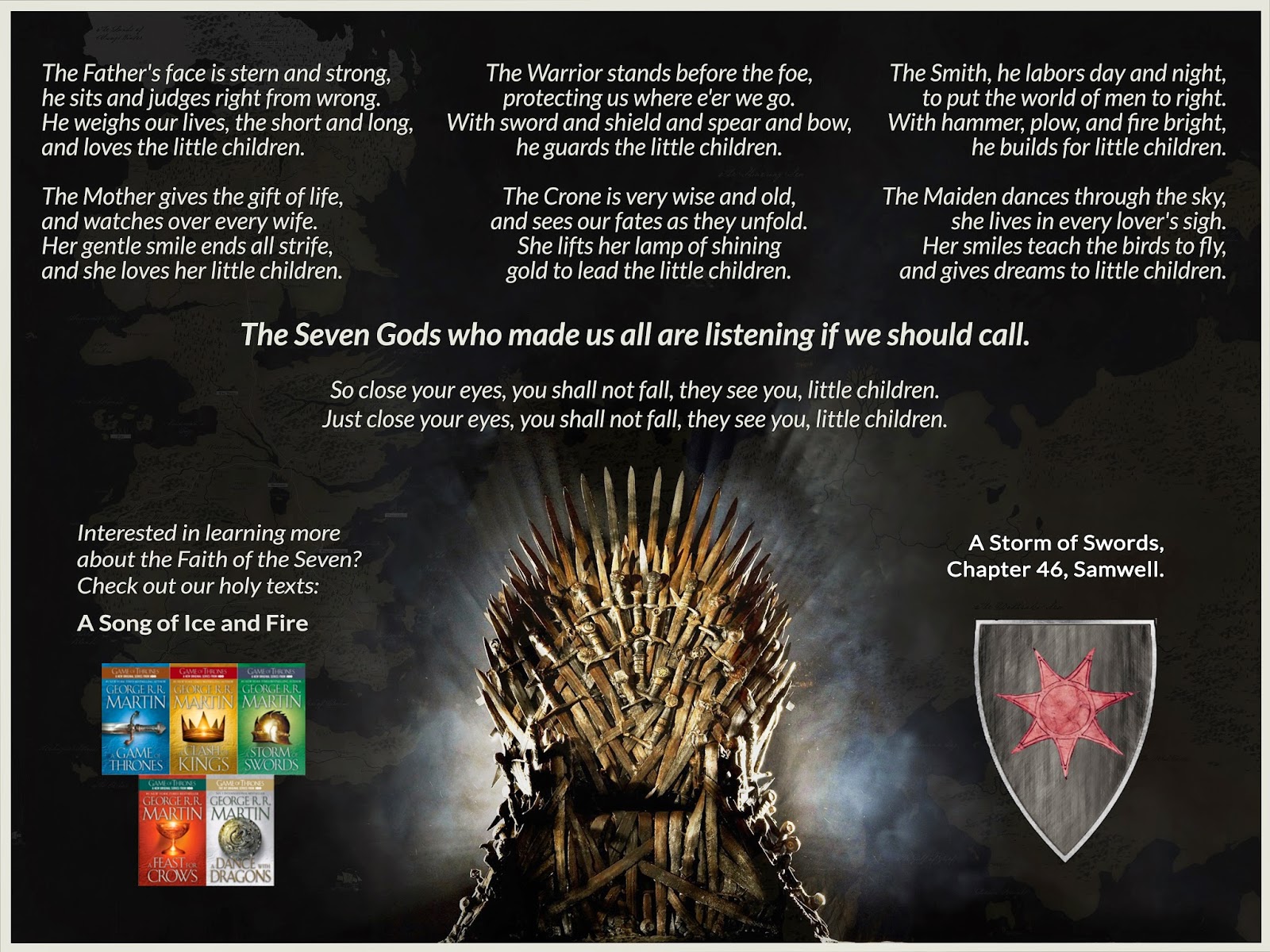 The intention of these displays is to advocate for the separation of Church and State, and to draw attention to the ridiculous public forum system in the Wisconsin State Capitol which allows nativity scenes and other religious displays to enter the halls of government. We would prefer that our Capitol remain secular and free from divisive religious intrusion, but when the State creates an open forum, everything is permitted. Hopefully the the silly nature of these displays will make people think about whether the Capitol is an appropriate place for promoting personal religious views.

Six other permit requests submitted by AHA officers were denied. These included signs which were intended to celebrate Norse, Greek, and Roman gods, as well as the Flying Spaghetti Monster. According to the Wisconsin State Capitol police department, the requests were not processed due to the limited amount of available space. This raises concerns about the open forum system. The state government is in no position to determine which kinds of religious free speech are legitimate and which are not. If space is limited, how will the Capitol police decide which permits to approve? What’s to stop one religious organization from flooding the forum with their own views, while others get left out?
Take a trip to the Capitol before January 5th and check the signs out for yourself!