Every year AHA tries to come up with a way to raise money for the Leukemia and Lymphoma Society. It’s not easy coming up with a unique idea that draws people in and encourages them to donate. This year we decided to combine our fundraising event with awareness for International Blasphemy Rights Day. 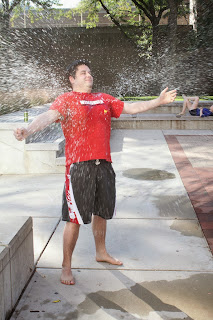 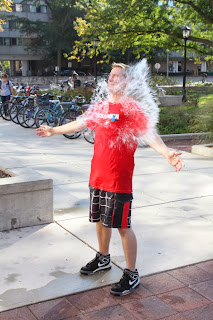 The idea was we would list passages from the Old Testament that urged its followers to stone those who didn’t believe. Oh course, since all of us here at AHA are delicate little flowers, we asked that instead of stones, people use water balloons! We teamed up with FFRF (Freedom From Religion Foundation) and sold water balloons for $1 that they could “stone” us with. 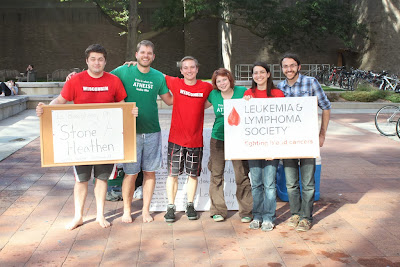 It’s always hard to tell how people will receive your message before you do an event.  I was concerned that people would be mad that we were “taking the bible out of context” or that our “blasphemy awareness was too blasphemous.” Of course it was all in good fun, but I can’t help but be worried that I will offend people when we make events like this.

I should give more credit to everyone we interacted with though. The reception was almost all positive! After people got over the initial shock of how silly it was they were really into it. People were high-fiving us afterwards, or if they were busy they would grin at us as they walked by. Quite a few people even said “But I LIKE atheists, I don’t want to stone you. Can I just donate instead?” That really made my day!

Not everyone approved though. This article that ran in The Blaze explained covered our event, but the readership was….well less than impressed. Well over 200 comments in you can see that some of my fears were realized:

“These people literally have nothing else to do with the poor pathetic stupid little lives.”

which another commenter replied with: “YEP! And I’ve got a truckload, with nice sharp edges….I’d love for it to become an annual event….”Come one, Come all! Bring the kids….Fun for the entire family!”

I know if these people only knew me they probably wouldn’t say things like that to my face, but it really shows me that these events are needed. Dialogue between people of different faiths is NEEDED! It’s not about saying who is right or wrong, it’s about understanding each other. And that is something I think is worth fighting for 🙂

1 thought on ““Stoning” Heathens To Raise Money for Cancer Research”