Skip to main content
University of Wisconsin–Madison
Earlier this month,
AHA put out the call to internet atheists everywhere, asking for donations for our Second Harvest Foodbank Fund Drive.  The response was immediate and overwhelming.  Thanks to support from Hemant and the fine folks over at Friendly Atheist (and additionally two moderately successful Reddit posts) we were able to raise an astounding $1010 within 12 hours alone.  This works out to a fundraising rate of roughly $750,000 per year. Unfortunately… this was the kind of trend that can only be sustained for so long.  Nevertheless, by the end of November AHA collected dozens of donations, ranging from $5 to $100, for a total of about $1500 in online contributions.  At our weekly meetings leading up to Thanksgiving, AHA members themselves gladly coughed up several hundred dollars in cash.
That us led to a Grand Total of… $2,000 raised!
As you may recall, this fundraiser also was a bit of a friendly competition between AHA and two religious student organizations on the UW-Madison campus.  You might be wondering what the outcome of that little contest was.  Well, the results are in, and they speak for themselves! 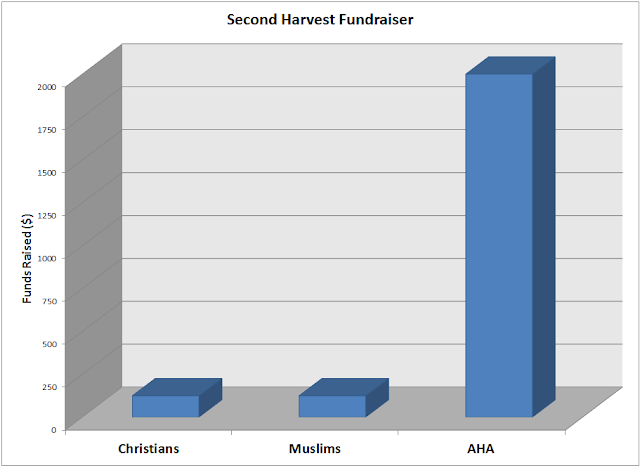 I’m extremely proud of this AHA victory, but will keep the gloating to a minimum.  Our friends at The Crossing and the Muslim Student Association are awesome people too.  Together, we were able to raise $2,250 for the Second Harvest Food Bank: that’s 6,750 meals!  Forget about who raised more – everyone wins when atheists, Christians, and Muslims put aside our differences and work together towards a common goal of helping those who are in need.

2 thoughts on “Update: A Charity Victory”