AHA, now in its 6th consecutive year of existence, is proud to be back with a vengeance this semester. Perhaps you were one of the thousands of students who saw our table at the Fall Student Organization Fair? If not, here’s what you missed out on: 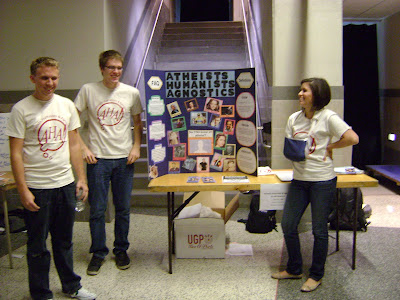 (AHA Officers in a rare moment when our table was not surrounded by people)
We collected over six pages of signatures in our signup notebook, adding 150+ new members to the email list in a single night! Having missed out on the Org Fair last year, this bodes well for the spectacular growth in membership we can expect to see each and every year for the next three generations of incoming freshman.
In other news, as always, there is much to be angry about in the atheist universe. Earlier this week, Pope Benedict XVI visted the UK to (amongst other things) blast secularism and blame atheists for the crimes of the Nazis:
“Even in our own lifetime, we can recall how Britain and her leaders stood against a Nazi tyranny that wished to eradicate God from society and denied our common humanity to many, especially the Jews, who were thought unfit to live… As we reflect on the sobering lessons of the atheist extremism of the twentieth century, let us never forget how the exclusion of God, religion and virtue from public life leads ultimately to a truncated vision of man and of society…”
(Full transcript here)
Luckily, I need not waste my time constructing a rebuttal on the historical inaccuracy and ironic hypocrisy of the Pope’s comments. Richard Dawkins has it covered, when he spoke to a crowd of over 10,000 at the “Protest the Pope” rally earlier today in London. Watch below:

Then, at the height of our collective rage – a ray of light appears on the horizon.

Rajan Zed, President of Universal Society of Hinduism, denounced the Pope’s comments, saying that he “should get rid of his obsession against atheism and show some maturity and inclusiveness.” Further, Zed argued “as Catholics and Hindus and others had freedom of their belief systems and were respected for their respective choices, and so should be the atheists. A religious leader of Pope’s stature should have been more inclusive.”
The may be hope for us humans yet.

1 thought on “AHA: Back In Buisness”