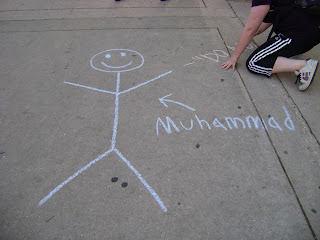 The deed is done… kinda.

Immediately upon arriving at our agreed upon meeting spot, we were somewhat surprised to see a large gathering of MSA students – also armed with chalk. After a brief discussion, and another explanation of the purpose of the event, the MSA informed us that they would not try to prevent us from drawing anything or attempt to censor our work, rather, they would merely be expressing their own freedom of expression by “adding to” our drawings. 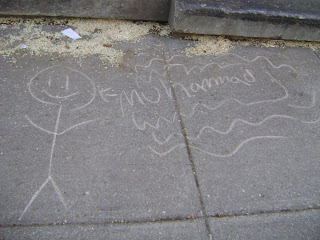 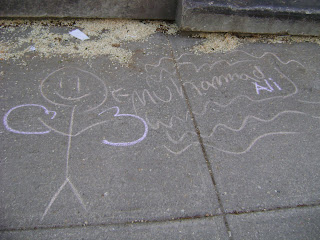 You’ve got to hand it to them, it was a creative and non-confrontational way to minimize the intolerable offense of seeing stick figures labeled Muhammad. It was a celebration of free speech for everyone! AHA students were outnumbered at least 4:1, so it was rather easy for the MSA to follow us around and make modifications to nearly all of our 50-100 drawings. 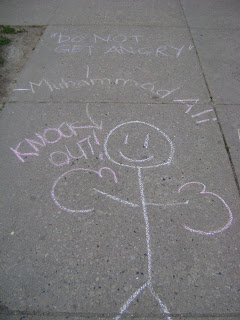 Curiously, many of the drawings featured the quotation “Do not get angry” – which I can only assume is a reference to the hadith in which Muhammad advises a man to, well, not get angry. Doesn’t attributing a quote from the prophet Muhammad detract from the goal of transforming the stick figures so they are no longer representations of him? I think “float like a butterfly, sting like a bee” would make more sense here.
(Incidentally, I do want to sincerely express my gratitude that members of both AHA and the MSA were able to remain calm and cordial throughout the entire chalking event)

So many Muhammad (Ali)’s was getting tiresome, so we introduced variations. 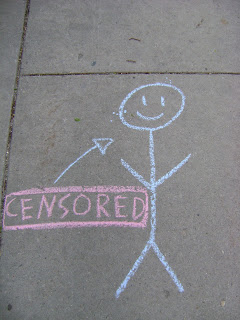 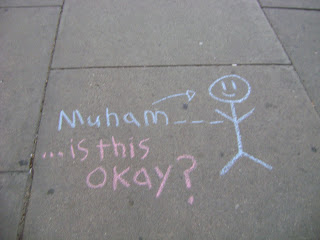 Some drawings evaded detection, including the pièce de résistance… An approximately 38 foot long version, which I’d like to think is among the biggest stick figures ever drawn, Muhammad or otherwise. 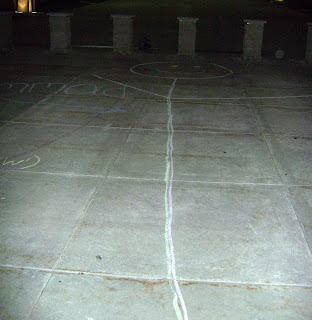 And then there was this one, NOT drawn by the MSA, but rather by an agnostic who was vehemently opposed to the event and categorically rejected all of our reasons for doing it. 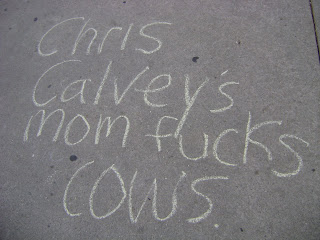 The point he was trying to make was that drawings of Muhammad are deeply insulting to Muslims on a very personal level – on par with the deluge of offense I surely felt when seeing this message. He argued that I, like the MSA, can thus reasonably respond to these transgressions by erasing or otherwise censoring things which needlessly cause offense.

And that’s where he is dead wrong.
Actually, I’m not insulted by speculations about what kind of animals my mother has intimate relations with. Really, I’m not. In fact, I’m not even insulted that the MSA chose to change our drawings. You won’t see me crying foul to the Dean’s office about this. And even if I was insulted by these or other things… too bad. Offense can go both ways, that’s the beauty of the freedom of expression. If people learn anything from this event (other than that, man, a lot of people suddenly seem to like Muhammad Ali) I hope it’s this:

We must all eventually come to the agreement that no religion, person, idea, or sacred cow should be granted immunity from criticism. In a free society, even opinions which the majority may find reprehensible have the right to be heard. Among these is the right to criticize religion and to perform actions considered “blasphemous.” When that right is under threat, as is clearly is today, we have a moral obligation to exercise it to ensure that it is not lost. We cannot tolerate limitations to our freedom of expression, whether they come from violence, intimidation, or self-censorship out of political correctness.

Finally, someone (presumably from the MSA, although I did not see it happen) chalked the following message from the Qur’an at the steps of the Union:
“To you your beliefs, and to me mine” (109:6)
Exactly. So stop demanding that we respect your beliefs about depicting Muhammad, as they do not apply to the rest of us.