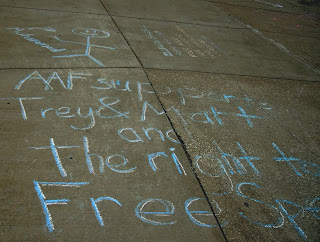 After airing an episode of South Park which suggested that the prophet Muhammad was hidden beneath a bear costume, the creators Trey Parker and Matt Stone received thinly veiled death threats from the American extremist group, Revolution Islam. In response, Comedy Central (and/or its parent corporation, Viacom) heavily censored the following episode, including bleeping out any mention of the name “Muhammad,” among other things. Previous episodes depicting uncensored images of Muhammad are no longer available online.

We believe that everyone has the right to express themselves freely without threats of violence, and that no one has the right not to be offended. We can not, in good conscience, do nothing about this situation.

In response, AHA is going to chalk around campus, labeling stick figures as “Muhammad.” We will meet on Monday, May 3rd in front of Memorial Union at 7pm.

We will NOT be making purposefully offensive or insulting drawings – only very basic and plain stick figures. We do not aim to mock Islamic beliefs, create a negative environment, or deliberately upset Muslim students on this campus.

1 thought on “AHA to Stand for Freedom of Expression”