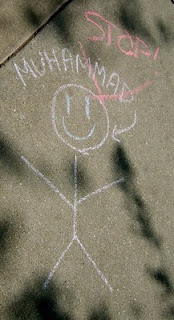 Within hours of sending my letter to the MSA, I received this sternly worded response:

I am the Vice President of the MSA and I will cut straight to the chase. Your apology is not accepted since your act is actually offensive. To slap someone in the face, despite warning the person in advance and assuring them of you good intentions does not make slapping someone in the face ok.

You said it yourself, it was an extremist group that announced the threat (assuming such threats were intentionally issued) and we as Muslims disapprove their act. Moreover, your method of protest and announced cause of protest do NOT match. Why do you not direct your protest to the groups in question instead of engaging in acts that you yourself acknowledge will offend the vast majority of Muslims, on this campus and off.

I would like to inform you that, as far as we understand, the event you are planning is illegal by the constitution of the University of Wisconsin (88-12 RACIST AND OTHER DISCRIMINATORY CONDUCT POLICY). Deviating from this law will offend not only the UW Muslim Students Association but the entire Muslim community on this campus and other organization of similar culture and faith. The Dean of Students shall be contacted immediately.

I politely suggest that you cancel this event and prefer instead that we meet and discuss the issue respectfully before resorting to what we feel to be rather drastic measures. No offense, but giving less than 24 hours notice seems to betray ill intentions.

I respect the fact you let us know about your plans beforehand but I also want to reiterate that we do not approve or agree with your highly offensive acts. I assure you that we believe in freedom of expression just as much as you purport to do.

Needless to say, I was disappointed by their response. I will admit, it is difficult for me to put myself in the shoes of a Muslim student on campus, and to truly understand how they will feel when seeing these images. It is distressing, to say the least, and part of me wants to cancel the event to avoid hurting my peer’s feelings. However, it is much more distressing to me that the MSA has resorted to exactly the same tactics they are condemning: using fear and intimidation to suppress criticism of their religion. Regrettably, it’s working – at least one AHA member has withdrawn his support from this event out of concern for his academic carrier. The MSA can not seriously pretend to support freedom of expression while threatening legal action action against us in the same breath.

The event will go on.

15 thoughts on “A response from the Muslim Student Association”