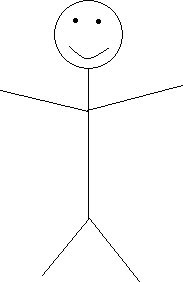 Given the obvious opportunities for this event to be misconstrued as an attack against Muslims on campus, the following letter was sent to the Muslim Student Association in an attempt to explain the reasoning behind the event:
“My name is Chris Calvey and I am the president of the Atheists, Humanists, & Agnostics (AHA) @ UW Madison. I am writing to you in regards to an event we are planning called “Chalking for Freedom of Expression” on the evening of May 3rd.

As you may be aware, recent episodes of the satirical cartoon South Park which contained implied depictions of the Prophet Muhammad have been heavily self-censored by Comedy Central (and/or by its parent corporation, Viacom). The creators of South Park, Trey Parker and Matt Stone, also received thinly veiled death threats from the American extremist group, Revolution Islam. In response, as an act of solidarity, AHA plans to chalk sidewalks around campus, labeling stick figures as “Muhammad.”

We are aware that depicting images of Muhammad is a controversial issue that is highly offensive to many Muslims around the world. We acknowledge that you may view this as an unproductive, misguided, or hurtful event. We are very sensitive to these facts, and want to ensure that this event is done in a way that does not lead to Muslims feeling uncomfortable on campus. That is why I want to explain our position and our intentions as clearly as possible before the event takes place.

These drawings are not intended to mock, intimidate, or harass anyone – rather, we aim to make the following statements:
1) We have the right to criticize religion and to perform actions considered blasphemous, even if many individuals find this offensive.
2) A free society cannot tolerate violence or threats of violence which seek to limit our freedom of expression.

Further, we fully understand that Revolution Islam is a radical, fringe organization that does not represent mainstream Islam in any way. It goes without saying that the overwhelming majority of Muslims, in the U.S. and across the world, do not view their tactics as acceptable.

Finally, one of the most important goals of AHA is to engage in constructive interfaith dialogue with other religious groups. Unfortunately the semester is almost over, but I sincerely hope we will be able to work together in the future to foster mutual understanding and respect between our two groups. Most of all, I hope that the members of the MSA understand that our actions are not targeted towards them personally, and that we are merely attempting to counter the suppression of free expression. I leave it up to you to distribute this message via any appropriate avenues at your discretion.

1 thought on “A letter to the Muslim Student Association”